I use a couple of external eSata drives (Seagate FreeAgent Xtreme).  When they start out plugged into the computer, there is never an issue with them showing up in Windows Explorer.

However, if I want to hook them up or move them once the computer is running, I sometimes have issues.

After a little research, I found that while Firewire and USB are fully plug-n-play, eSata is not.  This does not mean that you can't hot-swap eSata drives, it just means there is a trick.

It seems that the power to the drive is what triggers it being recognized by Windows. Plug and unplug that eSata cable all you want; it won't do a thing.

However, if you unplug the drive's power cable (I do it at the back of the drive, not the source) and plug it back in (assuming the eSata cable is already plugged in), your drive should appear in Explorer!

Posted by The Invisible at 2:33 PM No comments:

Backing up your Windows Mobile device

Here's a question: how in the FUCK does Windows Mobile Device Center not have a full back up feature?!

I'm talking about, God zaps you with a bolt of lightning or you're hit with an EMP and you lose EVERYTHING on your phone so you need to just restore the whole damn thing from your computer, maybe even on a replacement phone.

Evidently, it was a feature that USED to be in Active Sync, but for some reason MS decided to eliminate such a useful and important feature from their newest software.  This just seems WILDLY irresponsible.  It's things like this that get me closer and closer to jumping ship and going with the Droid.

I'm not convinced that the free route is the way to go here, as it appears that PIM Backup only backs up specific things (schedule, contacts, messages, etc.), not your entire device.  So I'm not sure this is really a viable option.

I want to be able to do a complete system restore point for my phone (like you would with your computer).

On Sprite's web site there is a phone compatibility page, but under Samsung only the i900/i908 is listed (NOT the i910), so I don't know that I'm willing to risk it.

Thanks for leaving us out in the cold YET AGAIN, Microsoft.

Mind the Gap: dealing with gaps in timelines when authoring 24p DVD's in Adobe Encore

The project is broken up into five "reels."  I assume if there was just one video stream (all five reels exported from one timeline), this issue wouldn't even come up, as the issue arises in Encore on the movie timeline between these clips.  But I'd really like to find a solution that allows me to keep these "reels" separate.

I've been researching the issue for the past day or so, and there is a lot of discussion about pull down, field order, flags, and a bunch of other stuff that I don't necessarily want to become an "expert" in.

I realize there is a standard for DVD's that requires all NTSC footage to conform to a 29.97 frame rate.  I also realize that "pulldown" (or "pullup," depending which way you're going) refers to making 24 frame footage conform to a 30 frame format by adding/removing frames.

Almost every source states that it's best to output your footage for DVD from Adobe Premiere (rather than let Adobe Encore transcode it).  Encore will then take your 23.976 footage and use it on the 29.97 DVD supposedly without issue.  However, there is some tweaking that needs to be done in the export, as the Adobe Media presets used by Premiere do not work "without issue" when authoring the DVD (see the "mind the gap" error message).

If anybody stumbles across this post and has some helpful information, please post in the comments!  I will do my best to keep this post updated via reader comments and whatever I find in my searches on the web. 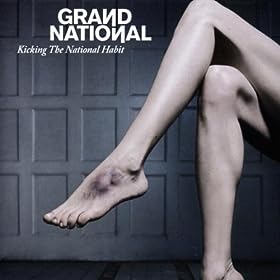 Shame on me.  Shame on me for not buying this album when it came out... FIVE YEARS AGO.  What the hell?  I LOVE this album.

I remember really liking "Drink To Moving On" when I first heard the song, but then it slipped under my radar and through the cracks and I forgot all about it.

Yesterday I remembered and subsequently downloaded the album.

The first three tracks are SOLID.  Track four isn't my favorite, but that's because I'm pretty much opposed to all things Ska (it has that sped-up-reggae, upstroke beat that just gets on my nerves) and I don't like the word "Boner."  It's still a pretty good track though, and I'm sure those without fear of Ska will love it.  However, the next track, "Peanut Dreams," though a bit repetitive, has a FANTASTIC bass/guitar hook.  I love it.

The chorus of "Daylight Goes" makes me miss The Police... a lot.  In fact, there is quite a bit of Police influence towards the end of this album, and in my book that's a good thing.

There are a couple other album standouts, but I'm going to give this one across the board approval.  I love the album.  The only negative is that I didn't get it sooner.

I have tried altering the existing Power Plans, and I have tried creating new Power Plans, both to no avail.  My laptop is a Dell Precision M4400, and does have a light sensor, but I've got it turned off, so it shouldn't be affecting my settings.

I have not been able to find a solution to this problem.  Anybody with similar problems or a solution, please post in the comments!

Posted by The Invisible at 11:36 AM No comments: