This is an old issue, but one that still comes up often enough for me.

I haven’t authored a 4:3 DVD in years.  This is because I haven’t seen a 4:3 screen in years.  Almost every television and computer monitor is now being made with a 16:9 (widescreen) aspect ratio.

However, we still delve into the archives often enough to find SD video that was shot 4:3.

When creating a widescreen DVD in Adobe Encore, these 4:3 videos usually wind up getting “stretched” on the screen to force 4:3 to conform to the 16:9 aspect ratio.  This is especially problematic when the video stretching makes your wife’s butt look wider than it actually is (doh!).  Thus, finding a solution was imperative.

For a specific example: I recently created a "wide screen" DVD of 20 or so archival live dance videos, along with some newer live dance videos as well as some dance for the camera pieces we had recently created.  Some of the archival videos were from quite a few years ago and had been shot 4:3, though most were shot 16:9.  When viewing the DVD (which is created as 16:9), there were still a few videos displaying 4:3 stretched to 16:9 rather than "pillar boxed" so there was no stretching.

Most of the clips were also rendered out of Premiere with the correct MPEG-DVD settings so that no transcoding was needed.  However, a few videos were still being transcoded by Encore, and this is where the problem was arising.

The solution for me was to go to those videos, right click on the video asset (not the timeline, but the actual video), "revert to original," and then "select transcode settings."  From here I could set the transcode setting as 16x9 HQ DVD instead of "automatic" so that the final video output was widescreen instead of the 4:3 that was getting stretched (Encore wants to leave a 4:3 original video as 4:3, which might make sense, but is not what we want for a 16:9 DVD!).

Hopefully this information helps someone find what they're looking for.

Posted by The Invisible at 9:22 PM No comments:

I love the Internets. Even more so, I love the people who take the time to share their knowledge to help out their common man (or woman or transgendered individual).  Social responsibility is a large part of why I share these tidbits of information that hopefully make someone’s life just a little bit easier.

Last week I pulled into the Post Office and ran inside to drop off a package.  When I returned to my beloved Jeep, I turned the key and… nothing.  Actually, there were lights, but they were accompanied by silence.  All the dash lights and everything came on, but there was no starter crank, not even the dread “click-click-click.”  Just silence.

Rather than start screaming obscenities, I pulled out my Droid and searched “Jeep Liberty Turn Key No Sound.”  There were a decent number of returns, but six or so down was a post on the wonderful LostJeeps.com with the title “06 CRD Won’t Always Crank… Problem Found!"

Throughout the thread were many suggestions, but the one that seemed to fit the bill regarded the actuator pin, a long plastic pin in the steering column that connects the actual key cylinder to the ignition switch (which seems like a ridiculous part… and even more ridiculous is the notion of making it out of plastic –this is a part that gets cranked/tweaked over and over and over again –plastic –really?).

There was a diagram and a suggestion to jumper the starter relay to bypass the ignition process.  I found a small piece of copper wire, jumpered the relay pins, and sure enough, little Thumper started cranking like a champ.  I pulled the relay back out and drove home, saving myself the time, hassle, and cost of a tow!  Very cool. 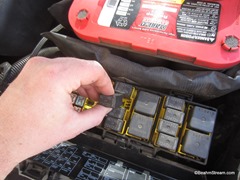 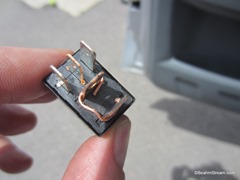 I actually spent the next week starting the car this way while waiting for parts to arrive.  I would simply turn the key to the “run” position, pop the hood, place the jumpered starter relay in its slot, and the starter would crank and fire up the engine.

If you’re doing this, just remember to pull the relay out before driving away, or the starter will keep cranking as you’re driving down the road.  Also, you don’t need to “seat” the relay all the way into its slot.  The jeep will fire up as soon as the pins hit the contacts.

Note that several people in the Lost Jeeps thread mentioned dealers that wanted to replace the ENTIRE STEERING COLUMN rather than service the part.  $1200 in parts and service vs. a little less than $40 in parts to do it yourself in about an hour.  This is EXACTLY the reason it’s a good idea to do a little research before simply turning your keys over to the dealership.

Surprisingly enough, it turns out that the METAL in my actuator pin housing had broken, not the actual plastic pin.  It looks like the metal was brittle and crumbled like the “pig iron” you often see installed for drains in old houses.

Here is a link to the part you will need:

Several people also suggested changing the ignition switch since it’s cheap and you’ve already removed it during the process, so I went ahead and did that as well.  Here’s a link to the part:

Here is a link on youtube that illustrates the entire process.  They do a great job of announcing the step you’ll be undertaking, then showing you how it’s done.  Great tutorial. I believe they are actually changing the pin on a PT Cruiser, but the process is nearly identical.

I also highly recommend reading the post on Lost Jeeps to prep yourself with general knowledge before undertaking the work!

Below is a gallery of the photos I took while changing things out.

Email ThisBlogThis!Share to TwitterShare to FacebookShare to Pinterest
Labels: do-it-yourself, how to, Jeep

There are a lot of places that do “photobooks” these days.  I’ve seen books from Snapfish and Costco, and while they’re fine (especially for quick presents for friends and family), they always seem just a little under par for what I’d like to see.

I did a bit of research a while back, and from what I found, I really liked Blurb.  Not only do they have the typical “upload your picks and choose from our styles,” but they allow designers like me to go crazy and do everything from the ground up.  They’ve even got a plug-in for InDesign.  This I really like.

I ordered a sample pack of their papers (both for pages and covers), and I think these guys are where its at.

Their prices are reasonable, and for the quality of what you receive, I think it’s the best deal going.

Not only that, but if you use this link:

Posted by The Invisible at 7:51 PM No comments: