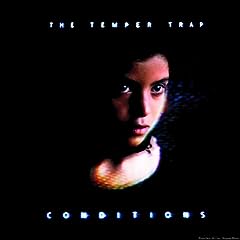 I just downloaded Conditions by The Temper Trap after hearing "Sweet Disposition" on the Glass Note label web page while looking for contact information for getting a sync/master license for a Phoenix song for our movie.

Being label mates with Phoenix is definitely a good first sign. They've got a similar "driving pop" vibe that I really dig. They've also got a little Snow Patrol (listen to "Fader") and Arcade Fire (listen to "Down River") action going on. They've definitely got a good deal of 80's influence ("Sweet Disposition" could have easily been on a When In Rome album --there's even a little Big Country, early U2 and Dream Academy spilling from various rifts in the album's space/time continuum).

The latter half of the album ("Soldier On," "Fools," etc.) leaves me with a kind of Coldplay meets the Bee Gees feeling that prevents me from giving the album a full "run out and buy it NOW" recommendation, which is not to say that I don't like what I'm hearing. I just don't feel as strongly about recommending it (though I do love hearing what it would sound like if Jose Gonzalez got together with The Killers to make a pop album, especially on "Resurrection").

After several listens, I still feel comfortable with a strong: if you haven't heard these guys, I definitely recommend you check them out.