This blog gets a lot of hits for people looking for the best and easiest way to stream music over wifi, so I thought I’d revisit what I’m using these days.

My goal was to get the cheapest and easiest set up, so that I can use it, my wife can use it, and guests can use it. It needed to be as easy to use and accessible as possible. I also wanted to be able to stream music to existing audio equipment that I already own. I’ve got a beautiful 1960’s Clairtone G2 that I love using (vinyl is great, but not always practical),

as well as a Carver M-400t cube with a Carver C-2 preamp running into some Magnaplanar MG-I IMP’s from the early 70’s.

Of course these systems both sound better with vinyl or CD’s running “real” audio (not compressed MP3’s), but when I’m having a party or messing around the house and don’t want to be manning the music at all times, it’s nice to be able to just let HAL DJ. 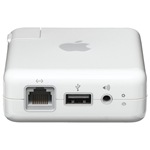 I searched and searched and searched for wifi audio streaming hardware under $50, but to no avail.   I just wanted a box to plug into my stereo that would stream music from my computer.  A used Airport Express from Ebay is definitely the way to go.  You can easily find them for around $40, and all you’re using is the audio, so you can use older versions without any trouble.  (Added bonus: with most AirPort Expresses, you could even hook up a USB printer to have WiFi printing at a central location in your home).

While I know there will be people who decry using iTunes as the main player in the set up, it’s free and while it has it’s draw-backs seems to be the easiest thing going.  Also, most other software developers allow for interfacing or at least exporting/importing data that will work with an iTunes core.

I like iTunes as the center of the system, because it makes it super easy to choose various speakers (zones) around the house.  You just go to the bottom right corner and select the speakers to which you want to stream from the drop down.  You can stream to just one or two, or all of them.  Simply select “multiple speakers” and the dialogue box below pops up.

The more speakers you stream, the longer it takes for iTunes to find them all and “get going” when you hit play (still under a few seconds with several speakers), but that’s a small price to pay for this simple solution to multiple zones.

Another huge benefit to a system with iTunes at the core is that, anyone with iTunes on their computer, an iPhone, or a compatible Android app can control the music play (if I let them), and they can even stream their own music to my system.

Obviously iPhones can work the system without a hitch, but if you’re on PC or Android, it’s still easy as pie.

For my Android device remote, I was originally using Jeff Sharkey’s TunesRemote, but he’s since stopped creating updates (not to mention you had to pair it EVERY TIME you used it, and that was a major pain in the ass).  But not to worry, as there is a dedicated community who has taken over the app (now called TunesRemote+), and they’re doing a bang up job!  The app stays paired to iTunes forever (I paired it once, and have never had to do it again), and it even works with some other programs like MediaMonkey and Songbird.  It is made to act exactly like the iTunes remote, so there are a few apps out there that might be more robust (edit playlists from remote, etc.), but this is the best and easiest free Android iTunes remote I’ve found.

You will definitely want (need) to download AirPort utility from the Apple website, as it is what will get your computer gelling with the Airports around the house.  It’s intuitive and easy to use, so you shouldn’t have any trouble getting up and running once you install and run the app and have it find all your Airports.

And those who simply refuse to use iTunes need not fret.  You can still use this setup by utilizing AirFoil ($25, both Mac and PC), which basically hi-jacks your Apple Airports and allows you to stream audio to them from anything on your computer!

I have come to a very similar conclusion. An old Airport Express linked via SPDIF to a digital in on the amp sitting next to a Devolo wifi over mains adapter does a splendid job in our old house with very thick walls.
I also have a Logitech squeezebox duet which is even better when it is running, but it can get the huff and niot connect at all until you do a factory reset. It was far too expensive (appx£200 UKP) and should not behave like this. However when it is running it is a little miracle.
You could also try one of the internet radios. I have the Roberts Stream35i which when hooked up to decent powered speakers - no digital out unfortunately - allows connection to on-line music and a great radio set to boot. At £125 UKP its a steal.

In Linux it's actually even simpler to stream music to the device. No need to mess around with iTunes - the device is simply selected through pulseaudio. Have a look at http://www.1ph0ne.com/2009/10/16/how-to-setup-ubuntu-to-works-with-airport-express/

Almost what i want to do but not quite. I want to be able to stream from any of my macs or i-devices right to my stereo. I don't want to use iTunes to do it. I want to be able to send from any program that is currently playing music on my iMac, Mac Mini, iPhone, or iPad. I could be playing YouTube video, for example, which is my preferred source for music these days, it seems. The iPad has a solution for this, sort of, using the showcast or whatever it's called, while playing YouTube vids. There's a little icon like a TV set with three concentric little arcs. I touch that and up comes a list of compatible streaming devices. My Sony Bluray smart DVD player seems compatible and it automagically sends the signal out the Sony audio port (HDMI) which I then pass through to my stereo. I haven't yet found a similar software button on my iMac browsers or on the YouTube web page to do that from a desktop Mac.

I did years ago buy a Linksys or D-Link box that you can stream whatever would be normally sent to a PC's speakers to the receiver box via WiFi. Once installed, it adds another output device for sound, to the Windows Control Panel and icon in the Windows tray so you can just toggle to the wifi receiver and audio is sent there instead of the to the PC's speakers. I don't think it works with OS X, and besides, the audio quality was terrible, very strange EQ, and noisy. There has to be a simple way of redirecting normal audio output from a desktop, iPhone, iPod etc to a little receiver box you can then plug into an aux input on a stereo. SUggestions?

Correction: I'm talking about AirPlay. Maybe what I want is some additional AirPlay gadgets such as audio receiver without the DVD player built in and some app or add-on for OS X to send to it. THere probably already is such a system for doing this that I'm just not yet aware of. Would appreciate any pointers, though.

Hi, Bob. Any device capable of transmitting to AirPlay *should* be able to send to the standard Airport. What I mean by that is, I have an Airport XPress hooked up to my stereo (via a 1/8" cable). I can stream audio from any of my computers or devices (Android, iOS, etc.) using apps that stream to AirPlay (the Airport Xpress). I also have an older Airport Express that I picked up on eBay for $30 on the patio, and another in the garage. My phone, my computer, my tablet are all able to stream audio to all three Airport Expresses (at once or individually).

I have been moving away from iTunes (converting a lot of my music to Flac, which Apple does not support), but I'm still using the Airport Expresses as receivers.

I use Airfoil to broadcast from my PC's (with MediaMonkey as my player), and I stream from my (rooted) Android devices using Allplay.