I am getting ready to make a cage for my 7D DSLR video rig.  I had been planning on using strut channel from Lowe’s with metal posts and bicycle grips. 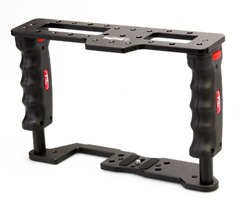 However, last week, Photography and Cinema released an affordable (what?!) cage called the GearBox.  It’s $80 (currently –they have a $130 with a slash through it, so I imagine the price will go up after the “introductory period”).  I can barely build something comparable from scratch (and this comes without all the work).  Most DIY blogs with info on how to build the strut channel/bicycle grip cage say the cost will be around $50, for for $30 you’re getting a rig with pre-drilled holes and a cut out in the base so you can swap out the battery without removing the camera from your rig… and you don’t have to do all the work of building it!

While I’m talking about P&C, why the hell haven’t I heard of these guys till now?  Looking around their site, they’ve got a bunch of great (and more importantly, affordable) stuff! 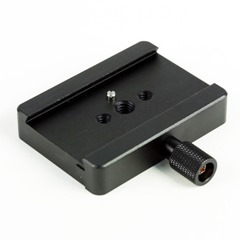 I have been trying to decide on which quick release plate system I’ll be going with, and it looks like there is a new contender with P&C’s 717 system.  Previously I was pretty sure I’d be going with the Manfrotto 577 ($51 on Amazon for the plate and release cradle), but I can get THREE cradles from P&C for $60. Hmmmm…

Posted by The Invisible at 9:56 AM