Will Side Scrolling Save MySpace? 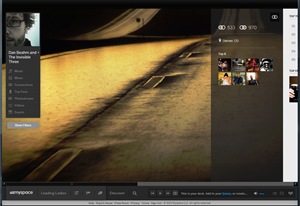 I’ve been treating them as spam, but finally today I did some Googling to figure out what the heck is going on.  One of the first things I found was this article on Forbes from back in January.

I vaguely remember some nonsense about Justin Timberlake (and Specific Media Group) purchasing MySpace for millions of dollars (turns out 35) back in 2011.  I guess they’ve finally put their ducks in a row and it’s time to show the neighbors.

So it’s no big secret that MySpace totally screwed the pooch on harnessing the advent of social media.  They could have ruled the world, and instead “Tom” stood with his dick in his hand watching Facebook cruise on by with billions of dollars whirling in the wake.

Perhaps MySpace will fall on its face again, unable to recover from a folly of such magnitude, but perhaps this is their chance at redemption.  We’ll see if the magic of JT can reach beyond SNL and revive another dying (dead?) media giant.

The new MySpace focuses almost entirely on music.  Not a bad idea, and definitely a great place for JT to test his powers.  There is a player at the bottom of the page that is always there.  If your looking at MySpace pages, you’re supposed to playing browser based music.  We’ll see.  It’s at least better than the abysmal service that is Sound Cloud (I know… maybe I’m just too out of touch to “get” Sound Cloud, but so far I haven’t been impressed; maybe I’m “doing it wrong”).

But here’s where it’s REALLY at [eye roll]: I have always like side scrolling, and it’s seemed to have been widely overlooked over the years by the vast majority of web design.  Not any more!  MySpace is all about the side scroll.  But will it be enough to resurrect the deadest thing still on the internet?

I guess time will tell.

Meanwhile, I took a few minutes to dust off a couple of my old MySpace pages (that I literally haven’t visited in YEARS!).

I still need to poke around a bit more to see if MySpace seems to be exciting/interesting enough to garner any of my precious internet time. So far it seems to be nothing like Facebook, so things look promising.

Posted by The Invisible at 6:17 PM