My Microsoft Sculpt was failing me.  I don't know if it was my incredible typing speed (ha!) or faulty hardware, but there were way too many "failed strokes" for me to keep using a wireless keyboard.  I love the Sculpt's layout, low profile, and portability, but it doesn't matter how good something feels if it doesn't work.

I started coding for design at the turn of the Millennium (so fun to say!), and quickly learned how bad a "regular" keyboard is for 10 hours or so of daily use.  Back then, there weren't a whole lot of "ergo keyboard" options; the MS Natural Keyboard was pretty much it.  But I found that my shoulder/wrist issues necessitated getting my mouse closer to the keyboard (my arm was sticking out to far to the side), so a keyboard with no number pad became imperative. Thus, I figured out how to saw off the number pad (as well as configuring various incarnations of track pads and tiny track-balls incorporated into the keyboard housing in various locations).

When Microsoft released the Natural Keyboard 4000, I upgraded, but again had to saw off the number pad.  Finally, in 2013 they released the Sculpt, and to my joy, it came with the numpad detached!  However, after years of use, the "wireless-ness" of the Sculpt can no longer fulfill my needs.  Thus, the search for a new wired keyboard began.

There is a dirth of one-piece split keyboards with no number pad.  And once you get into two-piece "coding" boards, the price goes up dramatically.

I researched for a couple of months, and the ErgodoxEZ and Dygma Raise ended up as my two finalists.  However, the Dygma uses it's own (though still open-source) Bazecor software for layout and functionality, which even after a couple of years in the real world seems to still have many issues (as reported by regular users), so I was definitely leaning toward the Ergodox, which utilizes a more established and ubiquitous open-source software and has many "compilers" available online for easy access and use.

Over the years social media and template-based web design has turned me off to designing for the web and the coding that used to go along with it (HTML, PHP, Java, etc.), but I still use a keyboard for 8 to 10 hours a day; it's just spread over more activities, the primary being video and music editing.

I began researching split mechanical keyboards just for their ergonomic benefit, but I quickly became very interested in how I could utilize the magic of programming the layout and key functionality to improve my editing workflow.

Now that I had decided which board was going to be best for me, I started watching eBay and Craigslist to find something a little more affordable than the $350 (!!!) the ErgodoxEZ was going to cost new.   The boards on eBay were mostly in auction format and still going for nearly retail.  Craigslist had pretty much nothing listed except a Dygma Raise for pretty much MSRP.  However, after a couple weeks of diligently watching, I got super lucky and found someone "cleaning out old stuff" who was selling an early model ErgodoxEz (no tent legs, no back light) along with a "Let's Split" tiny, mechanical, split keyboard for $100!

I've spent the last couple of weeks familiarizing myself with how everything works, developing my keyboard layout, switching out key caps, loving the "clickity-clack" of mechanical switches, and getting used to using a keyboard that looks and feels nothing like a "regular" keyboard.

For the configuration part, you just create a layout using Ergodox's free online configurator (or one of the many others out there), then click "compile" and download the binary hex file to your computer.  You then use a tiny little executable called "Wally" to flash the hex file to your board.

The fun part is the vast array of functionality with which you can program each key (multiple functions, macros, etc.).  The fact that you can use layers is also great.  Basically, with a keystroke, the entire keyboard can have each and every key reassigned to a new function... and you can have pretty much as many layers as you wish.

I began my journey with the Ergodox by looking for layouts that others had created for video/music editing, and surprisingly, I couldn't find a single one.  I don't know if it was due to sub-par searching skills, or the fact that these boards are targeted more at coders and gamers, but I couldn't find anything with "video," "editing," "Premiere," or even "Adobe" in the description.  After a while I finally found a layout with "Avid" in the title, but it appeared to be just the default keyboard layout.

What I quickly learned is that there are so many layouts available online in Ergodox's un-curated database that it would be futile to try and find one that fit my exact needs.  It has taken a few weeks, and I'm still making changes on a daily basis, but it's getting to a point where I am definitely in love with this board and what a customized layout can offer.

One thing I decided early in my keyboard development was that I was going to base the general layout on the "status quo."  I think a lot of people go so far outside the realm of normalcy that when they don't have their personal keyboard with them, they can't use a "normal" board!  I find this dilemma frustrating enough when I'm on someone else's computer, and I just don't have a split keyboard or my trackball or ShuttlePRO, so I didn't want to paint myself into a corner getting used to a keyboard layout that would alter my muscle memory into oblivion.

Thus, the first layer of my layout is based largely on the MS Sculpt that I have been using for the past seven years.  I have tweaked the layout a bit to maximize functionality with Adobe Premiere, but it's largely just a "normal" keyboard layout.  However, a lot of the "extra" keys are programmed with dual functionality or even macros that allow me to execute Premiere functions more quickly.

At first, I was worried I was going to have to program all the "shift" functionality for each key, but evidently that's an Operating System thing, so you don't have to program for that.  Any key in combination with "shift" does what it would normally do on any keyboard: lower case and capital, but also symbols with their pre-assigned secondary functions (i.e. ";" becomes ":" with the shift key).

The second layer I created for media and navigation.  I set one of the first layer keys as a "momentary switch" so that when pressed and held, the rest of the keyboard becomes controls for the media player, navigation arrows, etc.  The second layer also hosts my "mouse keys."  The Ergodox has some cool "mouse" functionality that I haven't played with much yet, but basically they make it possible to control the cursor as you would with a mouse, except with key strokes.  It sounds clunky, but evidently it's pretty effective once you get used to it.

The third layer I created as symbols and numbers, with the layout based on an actual number pad (along with it's specific functionality).

And that's about as far as I've gotten to date  I'm not sure if I'll create a fourth layer loaded up with macros and multi-function Adobe Premiere and After Effects keys, but right now I'm just getting used to and enjoying the improved functionality afforded by the current layout and combination keys. 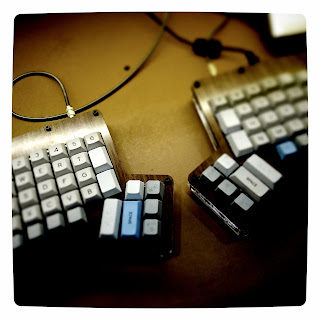 One final note: my ErgodoxEZ came with blank key caps, which is fine for "hands on" (literally) typing, but when I'm editing video and recording music, my hands are rarely fused to the home row.  Instead they are often handling peripheral controllers or jotting down notes.  Quickly finding keys is difficult with nothing printed on them! Luckily the "mini split" that came along with the Ergodox had printed keycaps.  I switched out all the ones that would work (letters and a few symbols), and then I penciled in the symbols and functions on the rest of the blank keys.  Obviously pencil marks aren't going to last long (not to mention they're hard to see), so I'm looking for a decent solution for printing on key caps.  I have seen a few people online having success with laser etching/engraving and toner, so I may try that at some point, but it would be nice to find a more permanent way to quickly mark key caps with their assigned functions.  That's really my only "gripe" at this point, but everything else is a great improvement upon my previous situation!

If you want to try out the layout I have created (and alter it for your own use), here is the link to Ergodox site:

Posted by The Invisible at 2:24 PM