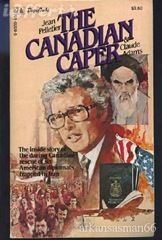 Posted by The Invisible at 5:14 PM

I too had the same deja vu experience viewing the trailer. Thanks for posting this. Now I know I am not crazy!!

You "smarts" understand that the fake movie is a fake movie because it was a cover (black op) from CIA to get the Americans out?....

I am sorry if you are aware of this, but it seems you don't know, and if you do, then add some lines in order to show that you know it was an operation.

And yes!, I understand what your point is; "It's a remake" but the BUZZ you mention is not because of Affleck stardom or whatever, but because of the story being a successful black operation.

thank you, it´s incredible nobody mentioned this. I saw the other movie a lot of years ago, but nobody would belive me!!!!!

THANK YOU!!!! I watched the movie and immediately thought ... wait I've already seen this .... haven't I?! I knew what was going to happen and everything , I asked people if Argo was supposed to be a remake they were all sure it was NOT! I thought I lost my mind lol thank you again!

Historically speaking, plastic glasses include the experimental spectacles in the time of invention of glasses.