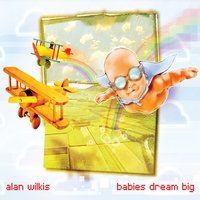 I get a lot of MySpace "friend requests" from bands. Usually, I make sure they're not a scam/troll/spam, and then click "ok" without doing a whole lot of listening; I usually give 'em 30 seconds or so. Every once in a while, something grabs my attention and I listen a little longer.

This one really grabbed my attention. I listened to all the MySpace tracks in full (I never do that) and then cruised on over to CD Baby and bought the album. I've NEVER done that (I know, pretty sad thing to say as one who claims to support indie music, but hey, I'm just being brutally honest here).

So anyway... fantastic! The 70's/80's sensibilities are about the closest thing I've heard to what I have been not only listening to, but also making as of late. I tend to lean a little further to the "sixties lounge" side of things, but I simply can't resist funk and 80's electronica when climbing onto the shoulders of musical giants. Apparently neither can Alan. I guess the easiest way to describe to you the sound of what Alan is doing is a kind of Beck/Prince thing, but it's not just "Beck" or "Prince" because it draws on more, and rings with the passion of a true indie-pop artist.

As recording becomes more and more accessible to any kid with a computer and the inclination, we are seeing more and more self-produced albums flood the market. At first, people were praising the dawn of a new age where labels and money were no longer going to restrict musicians from making music. Unfortunately the flip side is that it's really hard to find decent indie music; there's a lot of wading through a sea of absolute garbage.

However, Babies Dream Big is exactly what this "new era" should be. Somebody with great ideas, talent and nuance has been given the opportunity to express and share what's going on in his child-of-the-eighties-pop-addled head, and we are the beneficiaries.

So far my favorite is "I Love the Way." It walks the very fine line between cool and dorkusmagorkus kind of in the same way Beck started experimenting with on Midnight Vultures. Other direct-to tracks at the moment are "Milk and Cookies" (ooh that quasi "Sexual Healing" drum intro is great), "I'm Famous," and "I Wanna Know." ps The 8bit "Stage Select" between tracks 8 and 10 is pure genius.

Other bands/artists that come to mind upon the first couple listens (other than the aforementioned Beck and Prince) are Tallie Hall and Ben Folds, and the whole shebang is definitely very Beatle-reference-peppered.

NOTE: If you are considering buying the album, I would go with the digital download from CD Baby (cheaper than iTunes and no DRM) for $8.99 (which is a bargain), as the extra cash for the rather exorbitantly (for an indie album) priced "physical copy" [$11.99 + $2.25 shipping = $14.24] gets you bupkis. Where normally ponying up the extra cash for a physical album might get you some cool artwork, liner notes, etc... the physical copy of Babies Dream Big is simply a CD-Rom in a cardboard sleeve with a sticker on it.