I really miss my Droid Incredible.  What I don’t miss are the “memory full errors” (the phone not being able to use more than a couple of MEGABYTES for system storage), and, once they had released it, the constant “reminder” to update to build 4.08.605.15.

The thing is, I had already done that… a million times.  Very frustrating.

I still use the Droid as my bedside clock since it has a nice horizontal dock, clock and alarm, the monitor for my kid’s room, the remote for the HTPC, weather, e-mail, texting, etc., etc.

But the other day it started showing the “reminder” for the build update constantly.  Every time I clicked “later” or “now,” the reminder would disappear for a few minutes, but then come back. It just wouldn’t go away for more than a couple of minutes.

Oddly enough, the fifth time or so I clicked download and “reboot” I actually got a screen with a progress bar, as if a file was being downloaded (normally the dialog box just goes away when you click the “do it now” option). “HOORAY!” I thought, “Something different is finally going to happen!!!”  No such luck –exact same problem once the phone rebooted. 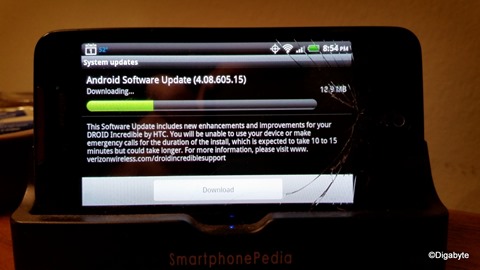 I really want to keep using the phone for my bedside device, so I finally got frustrated enough to track down an answer.

The obvious answer would be to root the phone, but I didn’t want a solution that involved (especially when I’m basically only using the device as a clock at this point).

I should also point out that my phone’s “info” screen showed that I was actually running build 4.08.605.15m but I also read on a few forums that the .15 build was actually more recent than .20.  Sounds counterintuitive obviously, but who knows why Verizon/Android do the things they do.

Another solution people suggested was to factory reset the device, but then you lost all your data.  Probably not the worst thing in the world considering this is no longer my “actual” device, but I was hoping for something less “erase-y,” so I kept looking.

Another thread suggested installing the update from an SD Card.  This involved downloading the update file (from sketchy, non-official locations), then entering the boot screen to install.  “Surely there’s an easier way!” I thought.

Finally someone suggested simply wiping the system cache (which must be done from hboot). It’s easy and it works.  Exactly the solution I was looking for.

But… as I went to click the “ok” I got the dreaded “system update” dialog box that I had been trying to get rid of!  AAAAARGH!

So I did that.  My phone went through all the reboot stuff, and now it would SEEM everything is fine.  I guess we’ll see.

For the time being at least, I’m so glad to have my device back.

Email ThisBlogThis!Share to TwitterShare to FacebookShare to Pinterest
Labels: Droid Incredible, gadgets, how to, rants, verizon