Well, I put a copy of Amplifier into the hands of Duncan Sheik yesterday. It's always weird giving your music to another musician (especially somebody who's "made it"). You feel kind of like a 3rd grade girl.

I used to think that giving your album to somebody who's found industry success meant that they would probably give it to someone who could make something happen, their producer, or A&R rep. or something. I remember how totally stoked DB3's drummer was to give the guitarist for Dashboard Confessional a copy of our album ...Straight On Till Morning. I think he really thought that was going to take us to the next level. [smile]

Those years of naivete have passed (actually, long ago) as a result of a mix of industry knowledge/jade and a strong dose of reality. I no longer think a famous artist is going to give the music to somebody who can "make it happen." I think that artist is the person who can "make it happen." I have come to realize that establishing relationships, however tiny or seemingly insignificant (to either party), is the seed for achieving success (defined here by notoriety) in music.

There is soooooo much to be said for "right place, right time." Why would you not get your album into the hands of everybody you can --especially if they're in the industry? These days (and even "those" days), it's almost always about that one person... that one person who listens and then has someone else listen or tells somebody about the music/artists; a relationship is established, something happens and then the spark ignites a fire. Expectations are of course to be kept in check, but why not get your music to anyone and everyone who will take a listen?

Mr. Sheik was speaking to theater classes at CU Boulder. He played a show last night at The Fox Theater, and since he recently won a Tony for his work on the Broadway hit, Spring Awakening, I guess somebody put two and two together and suggested he speak to students at the school.

It was pretty cool. Very intimate. Only about 20 people in the room, so it was more like a conversation. He spoke for a bit, then we asked questions and he answered.

One of the subjects touched upon was his Top 40 hit "Barely Breathing." Did you know that in 1997 that thing was on Billboard's Hot 100 for 55 weeks?! That's crazy. Duncan was kind of nay-saying the song, as far as how it was created and then treated by the industry, what it was like in his overall music career. I pointed out that I've worn that album out twice (yes, often skipping over "Barely Breathing" because I had heard it so much on the radio), but I would likely have never even heard of Duncan Sheik had it not been for that song. And as much as the Grammy's are a joke, the song earned him a nomination, which is definitely another major attention getter. For better or worse, that song pretty much made Duncan Sheik's career and allowed him to get the rest of his music into the hands of people who now know and love the quote "real" music of Duncan Sheik.

And I will point out that that evening at the Fox Theater, in a room full of people who were obviously there for the work that Sheik has put out in the subsequent years (Humming, Phantom Moon, Daylight, and White Limousine), the years where, to my knowledge, no songs (and some great songs, by the by) have gotten anywhere near the Billboard charts... he still played "Barely Breathing."

That said, the evening was great. David Poe (incidently, a MidWest boy like me) opened up completely solo, just him and a guitar. I'll definitely be checking out more of his songs. A lot of his chord structures were similar to some of the new "swank rock" that I'm working on. His stuff was definitely more blue light, smoke-filled room, Chet Baker type stuff, but those 60's lounge-y chords were very prevalent. Some highlights were "Hotel Song" (not sure if that's actually the title) [update... It's "Hotel Life." Thanks, anonymous commenter.] , "Love Won't Last the Afternoon," and "The Late Song."

Watching artists like David Poe perform is pretty depressing, not because they're not good, but because they're great. You realize that no matter how talented you are, timing and placement play such a painfully huge role.

Duncan and his keyboard player Holly Brook came out after David played, and performed a song before bringing out the drummer and string quartet. Good lord I love Duncan's strings (see Simon Hale). They played music from Duncan's debut album, Spring Awakenings, White Limousine, a musical about Emperor Nero that Duncan is working on, and then ended the evening with a great cover of Radiohead's "Fake Plastic Trees." Very cool with the strings and all.

All this the result of hearing yesterday morning from Erika that Duncan was speaking in the dance/theater building.

Hotel Life. There's a robot playing piano, thinks that you're my wife.

Thanks, anonymous. I will update the blog to reflect the correct title.

I spent some time trying to find the lyrics to this one, but couldn't find them anywhere.

If anyone knows where I might find them, shoot me a note! 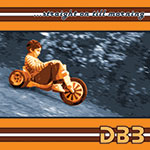