The Republican Party is Promoting Racism (don't believe me? read on)

Just so you don't think I'm simply making things up, let's start off with this: 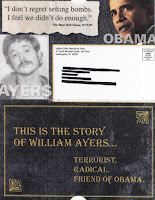 My parents received the flier in question while I was visiting them last week at their home in Indiana.

Go ahead. Click on the images to the left. These are scans of a mailing being sent out by the Indiana Republican Party.

Yes, the Republican Party is promoting racism as a campaign tactic.

This is absolutely unacceptable.

I realize the gloves come off at election time. If you're on the ballot, expect them to go through your trash and closets with a fine-tooth comb.

However, making things up is way out of line. Furthermore, making things up that promote and inflame racial tension is not only irresponsible, but should be punishable by law (hate crime is illegal). Yes we've all heard about people shouting things like "terrorist" and "kill him" at McCain/Palin rallies. Obviously there are idiots everywhere, and not everyone has the benefit of education and an informed world view on their side.

However, when Government Officials start participating, we need to take a step back and re-examine what we're going to call "fair play." 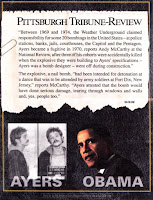 Repute the claims however you want, but the fact of the matter is that Obama is certainly not a terrorist, he was 8 years old when Ayers was doing the things that have gotten him labeled a terrorist, and someone does not become a terrorist simply by proximity. Yes Obama lives in a neighborhood near Ayers' current location (Hyde Park in Chicago), and yes Obama served on a board that Ayers was also on. Obama has refuted any ties to Ayers (especially and emphatically the claims that they are "friends"), and unless there is any more "proof" of binding ties to bring to the table, that should be that.

Instead, The Republican Party, in what I would posit has become a "typical" method of preying on fear and hatred, is continuing to stretch any sort of truth far beyond breaking point.

The first page of this flyer puts an uncredited Ayers quote [10/28/08: looking at that quote again, I don't think it's even an Ayers quote --I think it might be from one of the 9/11 terrorists; wtf?!], poignantly dated 9/11, next to a photograph of Obama looking over his shoulder. Also in bold text: "Terrorist. Radical. Friend of Obama."

I'm not sure that there's any reason to further explore the mailing itself, but I think people need to be aware of what is being put into play, who is doing it, and what the repercussions are.

This behavior is simply disgusting. I'd like to say I can't even believe it, but I guess I need to come to terms with the fact that we live in a new era of fear-mongering and hate.

Please get out there on November 4th and make your voice for truth, honesty, fairness, equality and love for your fellow citizens heard loud and clear. We simply can't take much more of this before the whole thing goes down the tubes.
Posted by The Invisible at 3:16 PM

The GOP promoting racism in the KKK's former home county?!? I'm sorry, Dan...clearly you photoshopped all of that together because as a musician, you're part of the liberal media.

So it was Ayers who said it after all. I bet the person who put that mailer together wet their pants when they found that quote, and dated 9/11 no less.

But it only goes to further the point that the Republican Party is playing on fears and racist notions... using 9/11 and terrorism to slander Obama and instill fear in the ignorant.

I think the 9/11 date stems from the quote being published in the New York Times, unfortunately, on 9/11. I do believe that this is an attempt to paint Obama with the broadest brush possible as a radical liberal with questionable associations...but racist? Unless they are trying to portray Ayers as an Arab Islamic Fundamentalist (which the picture clearly shows he's not), how does race enter? Am I being naive'? Associations are a part of every campaign...Charles Keating has been raised by the Obama campaign and McCain was cleared of any wrongdoing in that investigation 20+ years ago. I wouldn't blame the DNC for mailers if McCain had associated with a known, admitted and unrepentant domestic terrorist. Was the mailer blunt...yes, all marketing is...

@eric: Yes. I think you are being naive. Actually, I guess I don't really think you're being naive, I think perhaps you (understandably) just don't want to admit that The Indiana Republican Party is behaving as despicably as they are.

Indiana McCain/Palin rallies are rife with xenophobia, racism, ignorance based upon fear, etc... In no way am I saying all Republicans suffer from this ignorance and deplorable behavior, but I am saying it's a fairly substantial contingency in the Republican voter base.

To try and pretend that this piece of "literature" is not preying upon those fears and issues is to fool one's self.

And no, I don't think The IRP is portraying Ayers as an "Arab Islamic Fundamentalist" (ps if that's to be a negative term, I think we need to throw in the "radical" descriptor, as being an Islamic Fundamentalist is "no worse" than being a Christian Fundamentalist). I think the IRP is trying to portray Obama that way by associating a black man with "terrorism" and the date "9/11."

And even if this were "simply an association piece," Obama is hardly buddies with this guy, as they try to make him out to be.

For mis-attributing an accurate quote that has been around for 7 years to a "racist" Republican, aren't you promoting hate towards me and 50% of my friends? Your claim that McCain/Palin rallies are full of racists is inaccurate too. Such bullshit... I have never seen such hostility towards people that have differing policy views...I doubt you'll see huge rallies of Republicans burning Obama in effigy like you do libs with Bush...look at Steve's quote...straight to the KKK...hell just throw in a "Nazi" for good measure...the way I see it, this mailer ACCURATELY points out that Bill Ayers is in fact a terrorist and accurately points out that he and Obama are friends (what "level" of friends is debatable but it doesn't say "buddies"). If someone jumped to the conclusion that Obama was an Islamic Radical terrorist based on a mailer that says nothing of the sort, they're racists who wouldn't have voted for him anyway (and according to Murtha, many of them are Democrats living in Western Pennsylvania)...100% of the Republicans I know are not voting for Obama because they do not like his policies...but he makes them feel good when he gives speeches.

I'm not sure that I misattributed any quote... the literature in question gave no source except the NY Times. I didn't know who said it when I wrote the blog post, and I said as much.

Plus... I'm a guy with a blog, not an elected official. I think there is a HUGE difference.

Additionally, I didn't attribute the quote to a racist Republican... I wondered who it was from and made no mention of attributing it to anyone in the Republican party. So, no, I'm not promoting hate to you and 50% of your friends.

I'm not sure why you are denying the racist contingency at McCain/Palin rallies. There is plenty of documented proof (tons of video) as to their presence. As stated previously, in no way do I think all Republicans are racist, I don't even think anywhere near a majority are, but that is not to say there aren't a lot, especially in states like Indiana and Michigan. And yes, Indiana was the KKK capital for a long time... so why is what Steve said such "bullshit?" The gist of what this mailer is about goes straight to the same kind of thinking promoted by the KKK. I don't think it's a stretch at all: prey upon people's fear and ignorance to further an agenda.

Do you deny that there are still a lot of people in this country with unbelievably backward and racist notions toward people of another color?

Hillary Clinton repeatedly stated that the Obama/Ayers relationship should be explored. Was she promoting racism?

@anonymous: I think it depends a lot upon how she did it, and this is EXACTLY my point.

"Check out the relationship between these two people and make sure things are ok" (which, turns out, they are) is one thing. "Obama is a friend of a terrorist" with 9/11 quotes and wild accusations ("they're friends!") is completely another.

There are a shit load of racists in the country...the notion that most of them are Republicans is horseshit...plenty of redneck blue collar dems burning crosses too...good ol' union boys...

stop the hate...republicans are good people...

the reports of "kill him" were dismissed as crap...a secret service agent in Palin's detail has stated that he never heard anything like that...are there a few people that have said inappropriate/inaccacurate things like that clown ass lady at a mccain stop that said, "he's a muslim" ...sure...but mccain put the smack down on her and said how much he respected obama and what a good guy he is...

So as long as you don't mention that Ayers is a terrorist while calling into question a relationship with him because he's a terrorist, you're fine?

"friends" is a "wild accusation?" the obama campaign even referred to them as "friendly."

okay, this has been too fun but now i have to work...later.

don't be a hater...there are plenty of fuckups for everyone's party...

"Do you deny that there are still a lot of people in this country with unbelievably backward and racist notions toward people of another color?"

No, and if the GOP were playing that card, they'd just send out a mailer that said, "Hey, turn on the TV and look at the guy running for president!"

"There are a shit load of racists in the country...the notion that most of them are Republicans is horseshit...plenty of redneck blue collar dems burning crosses too...good ol' union boys...

stop the hate...republicans are good people..."

And now you are putting words in my mouth. I never said most racists are Republican. I said with this mailer the Republican Party is preying upon (and promoting) racist tendencies.

I know there are good Republicans. I have a lot of Republican friends. My wife's entire family is majorly Republican, and so's my mom's entire side of the family.

You are getting really defensive about things that I haven't said. What I AM saying is that this kind of literature is extremely irresponsible on the part of the Indiana Republican Party.

As far as my notions being unwarranted, here are just a few clips of people at McCain/Palin rallies:

Quotes from the above clip:

"I'm afraid if he wins, the black'll take over."

"When you got a negro runnin' for President, he ain't a first stringer."

"...just the whole Muslim thing and everything..."

"Obama and his wife, I'm concerned that they could be anti... white."


Yes, these people are a looney, backward minority, but this is who this kind of literature is pandering to.