I used to buy most of my computer stuff on Newegg.com, but as of late, mostly everything comes from Amazon.  At first this was because I signed up for a Prime membership and all my shipping was free, but now it’s mostly for price and selection (everything available on NewEgg is on Amazon, and usually at a lower price –with free shipping to boot).

Add to that that Newegg has started utilizing “click here to be sent an e-mail containing the price of this item” listings, and it’s just NOT worth my time to even LOOK at Newegg.com.  What in the WORLD?!  It’s a stupid idea, and when the prices are STILL higher than Amazon and I STILL have to pay shipping from NewEgg, why would I bother with NewEgg?

For instance: I’m getting ready to purchase a Samsung 840 SSD for my system OS.  The price on Amazon is $225 (free shipping with my Prime account).  I checked out Newegg just to make sure, and had to fill this out and check my e-mail TO EVEN SEE A PRICE! 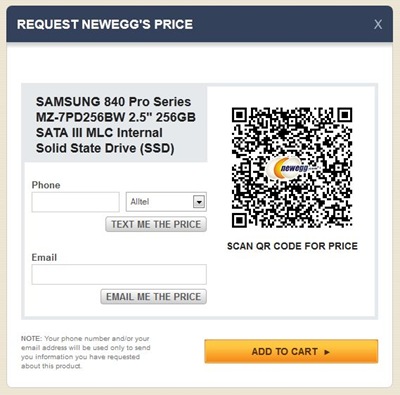 On top of the inconvenience, the price is actually $25 more than Amazon, and I am also stuck paying shipping!  Massive fail, Newegg.com.

Newegg has a new membership “free shipping” program like Amazon Prime, but why would I sign up for free shipping on NewEgg at the same price as Amazon when my membership at Amazon has SO MUCH MORE available (not to mention all the Prime Video Streaming available with the Amazon Prime program)?

I realize this is an example of a HUGE company crushing the competition and removing competition from the consumer which could eventually adversely affect the prices and services I see, but NewEgg needs to find a better way to compete with Amazon, because this certainly IS NOT IT.

Installing an Auxiliary Input for an RBQ Dodge/Chrysler Factory Stereo

I have a 2006 Jeep Liberty CRD (diesel).  It has the in-dash 6 disc changer with Sirius satellite radio (which I will never use) part # P05091507AE.  This was the penultimate of the stereos for the vehicle in 2006 (the RB1 nav radio was the ultimate) and is designated as the “RBQ” unit.  However, it COMPLETELY fails to address MP3 audio (brilliant).

Every iPod/auxiliary input adapter out there says “NOT FOR RBQ STEREOS.”

I don’t want to replace my factory stereo with an aftermarket head unit, because I think they look like crap, they are more likely to be stolen, and they won’t work with my integrated steering wheel controls.  I’m kind of assuming there may be another factory stereo I could purchase that will work with my steering wheel controls and already HAS an auxiliary input (or at least plays MP3 CD’s), but it’s a bit like the proverbial needle in the haystack (I searched a while and gave up).

So, I’m trying to find a DIY solution to address the problem.

This post (http://www.dodgetalk.com/forums/showthread.php?t=308955) shows the installation of a TERK XM XMDCHY100 in a 2005 Dodge vehicle with the RBQ radio.

This unit is actually used to install XM Radio, but the adapter includes an auxiliary input so would work for my purposes.

I was not able to find this model (sales discontinued on every listing I found).  For reference (if you find one), it looks like it was priced at around $100 new.

This post (http://www.srtforums.com/forums/f75/how-add-aux-input-factory-6-disc-622653/) seems like an even better solution, because it only involves a five dollar part from Radio Shack (a five pin 1/8” jack).  It does involve quite a bit more work, however, so some readers may be intimidate by all the wiring and drilling for dash mounting involved.

The mod is performed on a vehicle with an external CD changer, but it seems like the mod would perform the same splicing into the XM Radio connection (turbo04 confirms this with his post here –worth a visit).  You MUST use the five pin 1/8” jack (NOT the 3 pin), because the 5 pin jack will send a signal interrupt to the unit when a cable is plugged in (telling the head unit to use the jack instead of the satellite radio).

Also this mod (adding the 1/8” jack) will only work when there is an XM Radio unit hooked up, otherwise, the head unit will not “see” that XM Radio is a valid source, and just skips over that connection when you’re hitting the mode button.  Furthermore, there seems to be some contention as to whether or not the XM Radio must be functioning in order for this mod to work.  Many users report that without actual audio from the XM Radio (whether it’s the preview channel or an actual subscription), the stereo will not recognize the auxiliary input jack.  Without performing the mod, I’m not sure how to confirm this. 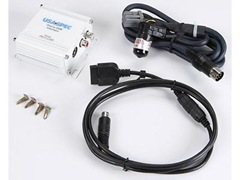 Finally, over the coarse of researching this post, I found ONE SINGLE available unit that will supposedly work for my factory stereo.  Here is the link I found: http://www.ipodcarpros.com/p63/PA11-CHR/product_info.html ($115)

Here is the same item on Amazon:

and Crutchfield (though a search for your vehicle WILL NOT return the item on their site):

The first “most helpful” review on Amazon is from a 2006 Jeep Liberty user, so I am getting my hopes up. Another ‘06 Liberty reports that the unit won’t charge his iPhone 4 (might be iPhone 4 specific since he says it DOES charge his Nano).

This unit is more expensive than the 1/8” jack mod, but it does have the advantage of charging your iProduct and allowing you to use your steering wheel controls to access your iPod (though it only allows you to scroll through your first 5 play lists since it’s treating your iPod like a CD changer!!! [update] --evidently you can select which 5 playlists to access).

The PA11-CHR does have RCA input jacks, so with a simple RCA to 1/8” adapter you’ve also got a regular auxiliary input.

After reading all 22 reviews, there are quite a few reporting low hum or static, but one person suggests simply putting the unit in a static bag to solve the problem, so I think I may go for it. Some users also report that this unit switches over to FM Radio randomly, but most note that it doesn’t happen that often.

FWIW, several retailers selling this unit online say that it will not work with RBQ stereos, but other sites (and users) confirm that it will.

There was apparently something called the “Mopar iPod Integration Kit” available at one time, but damned if I can find it for anything older than 2008. [update] The only 2005-2007 model I’ve found is being sold for $318… almost the price of a new Jeep! This would most certainly be another great possibility if you are able to find one at a decent price (works with all models including the RB1 nav radio and RBQ). –just found the model number necessary Part # 82209616AD; the msrp was $175.

Here’s a post on WKJeeps.com that shows all the iPod kits available from Mopar.

[UPDATE 5-17-15] I can’t believe how cheap some tech things have become.  I recently purchased a Bluetooth dongle for less than $5 from Amazon.  I plugged it into my Jeep’s USB charger and then plugged a 3.5mm cord from the dongle to the aux port in my PA11-CHR.  Now every time I get into my Jeep, my phone automatically finds the Bluetooth dongle and I can stream music (and calls) wirelessly to my factory stereo.  The iPod still works as well (just turn the stereo off and back on to switch from aux port to iPod port –whichever is active will take over).