My Take on SOPA and PIPA 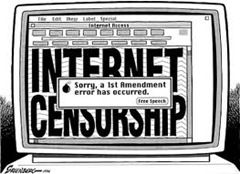 There has been a lot of attention given to SOPA and PIPA over the past week.  Unfortunately, I predict in another week, like so many other “hot current media topics,” no one will give the issue a second thought.  But it’s an extremely important subject that hopefully doesn’t just fade into the background once Wikipedia comes back on line.

These bills have been proposed with the notion that they are intended to stop or at least curb intellectual property theft (online copyright infringement).

Get this: I am 100% against pirating and copyright infringement.  I make my living by creating music and film.  If people decide they can download my material without paying for it, I can’t buy groceries.  It’s astounding to me how many people think it’s OK to do this, as if it’s not affecting artists/authors and no one is getting hurt.  Can you imagine if I walked into the dentist’s office because I needed a filling, got my tooth fixed, stood up and walked out without paying?  EXACT SAME THING AS DOWNLOADING ILLEGALLY FROM THE INTERNET.  Just sayin’.

However, there are major issues with SOPA and PIPA that don’t seem to be getting as much attention as they should. Everyone’s talking about the possibility of people getting huge penalties for minor copyright infringement (ridiculous notions like a 13 year old girl getting 5 years in prison for uploading a video of herself singing a Katy Perry song), but that is the least of my worries.

Our film distributor recently asked us to take a stand in support of the bill.  At the time, the bill was much more wide-sweeping and draconian, but even in it’s current, somewhat watered-down state, some of the issues below still stand.  Thus, I am posting my response here:


I am ALL against piracy and am willing to do whatever I can to help stop it, but as I understand the situation from having read the document in question, this bill goes far beyond upholding copyright to give the government wide-sweeping power that would allow them to shut down whatever IP's they see fit without any sort of court order or subpoena.  Essentially, this means that the government could censor free speech whenever and wherever they wish.

Without getting all "conspiracy theory," I truly believe this is a thinly veiled attempt to hamper free speech by claiming a desire to uphold copyrights and intellectual property rights.  As we have recently seen from the Arab Spring and other Democratic uprisings across the planet, the internet is an invaluable tool for free, unhampered communication, and I cannot support any bill that so blatantly hinders that free speech.

For too long politicians have been getting away with passing bills utilizing language that reaches FAR BEYOND the scope of the issues they claim they are addressing.  This behavior was rampant during the Bush administration, and it will take decades to undo the wrongs that were written during those dark years.  I cannot be a part of supporting these actions.

Were this bill more specific to targeting piracy and specifying that ANY sort of investigation whatsoever needed to be provided to initiate the freeze on targets, I might be more on board.  If the bill utilized language stating specifically who was being targeted (pirates and websites breaking copyright laws), that investigations would be conducted to prove that the targets were breaking copyright law and specifically disseminating copyrighted material illegally, and that these powers could not extend beyond preventing piracy, I would be in full support.  However, that is not the  case, this bill would give too much power to people who would almost certainly abuse it, and thus, unfortunately, I believe this is a bad piece of legislation and cannot support it. 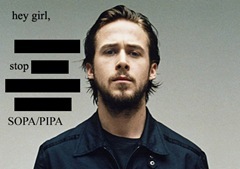 The list below (and picture of Ryan Gosling above) is from a website called SopaBlackout.org.  While I think the first point is kind of crap (since the entertainment industry is already shouldering similar expenses… which in turn lead to overpriced media, by the way), I think the site makes some salient points about how blacklisting IP’s that host copyright infringers is too wide-sweeping and would be a horrible overreach. Please pay particular attention to the last point.

So there you have it.  I think websites that encourage, promote, and facilitate piracy and copyright infringement should be shut down.  I think the people running these sites should be put in jail.  However, giving the government wide-sweeping authority to simply shut down entire IP’s on a whim is a HORRIBLE IDEA that goes far beyond stopping or even curbing copyright infringement.

At some point the US Government MUST start creating legislation that addresses ONLY the intended purpose in a specific and poignant way instead of making laws as ambiguous and inclusive, even of non sequitur issues,  as they can get away with.

p.s. Yes, I get the irony/hypocrisy that all the images in this blog post were simply re-appropriated from the internet.

Bravo, sir. You did a brilliant job of articulating many of the reasons I fear these proposed legislations and other bills similar to them. This isn't an attempt to help...it's an attempt to hinder...to make the brainwashing and buying of our population easier for those who already seemingly control the media. - LV