The Mystery of the “Universal” Quick Release Adapter

I have many things to which I need to mount a camera (fluid heads, a Kessler crane, high hats, table dollies, rig cages, shoulder mount rigs, etc.).  Rather than screw a 1/4” #20 thread into the bottom of my camera every time I switch devices, I would like something that makes “swapping” easier.  Luckily there is something called a universal quick release adapter; it’s basically the plate and cradle system that exists for a tripod head, but the tripod head part (the cradle) can be mounted to various objects.

The problem is, all of these “universal” systems aren’t really very universal.  They are all different sizes.  There is no standard for the size of the plate, thus you must by the whole “system” (plate and cradle) together.  There are rumors floating around that certain brands are compatible with each other (Manfrotto and Schechter, for instance), but this situation is pretty rare.  It would be nice if all the manufacturers got together and settled on a standard size for the base plate, but I wouldn’t count on this happening any time soon (meaning: ever).

I have spent hours, days, weeks even, researching universal quick release adapters trying to find the best system for my purposes.  Because I only have three cameras, I only need three plates (the thing you “permanently” affix to the camera).  However, since I have so many things to which I need to mount my camera, I need quite a few of the cradles (the part that mounts to the crane, rig, tripod head, etc.).  Thus, cost is a serious concern.  That said, I don’t want to simply go with the cheapest thing out there, because it needs to work.  I don’t want to mount my camera on a 12 foot jib arm, and have it come crashing to the ground because I had to compromise on quality/security for cost.

I would also like to maximize on the “universal” idea (buying plates and cradles that are more interchangeable with other brands and devices), but there doesn’t seem to be a lot of information out there regarding what plates and bases play nicely with each other. 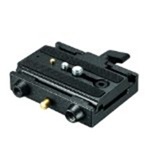 Most of my tripods are Manfrotto/Bogen, so my initial thought was to stick with the brand I use most often.  They are tried and true, and probably the most “known” at least semi-affordable brand in the tripod game (at least as far as still photography is concerned).  Plus, the plates that come with the Manfrotto 357 (w/357PL plate that replaces the 3273 and 3272) and 557 (w/3433PL plate) universal quick release adapters work with the 701HDV, 501HDV, 503 HDV and 526 Pro Video fluid heads, as well as the 561BHDV-1 Fluid Video Monopod with Head.  Still, this means you are buying into (and thus must stick with) the Manfrotto family (sounds like a gangster movie, huh?).

The 357 (with the longer plate included) runs around $45, while the 557 (with the shorter plate) will set you back $50.99.  I have no idea why the item with less material involved is cheaper. 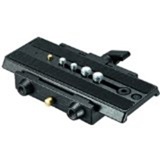 The 357 is made for larger (longer) cameras, but the longer plate has the added effect of allowing you to slide the camera forward and backward by up to 3.15 inches.  This is great for accommodating different lengths of lenses, and also for adjusting the center of balance if you are using any sort of rig with your camera. The 557 only has 20mm, or .8”, of travel.  Be aware though, many people complain about the extra length of the 357 when using DSLR’s.  For instance: the extra length of the base plate can interfere with viewfinders and battery backs in the back, and/or adjusting the focus/zoom in the front.

Though both plates fit in both receivers, evidently the 357 is slightly wider than the 557.

[update: it has been pointed out that “slightly” actually means a full 6mm; also, the receiver plates have different widths for the “grasping side plate” so the 357 and 557 are not necessarily interchangeable when using both receiver cradles.  Be sure to check the comments for more information.]

If I could purchase multiple receiver cradles (just the receiver) for a cheaper price (not paying for the plate as well), I would definitely go the Manfrotto route.

In the process of writing this post, I found this Calumet quick release plate on Amazon for $35.  All of the reviewers are saying that it is interchangeable with the plates for their Manfrotto 501’s, so… here is a less expensive quick release system, though not as cheap as the 717 system listed below.

A company I only recently became familiar with because of the very affordable DSLR Cage they are offering, PhotographyandCinema.com, offers a quick release system called the Fancier 717 Quick Release Adapter.  The Fancier 717 wins hands down on price.  For $60 you can get THREE cradles.  Since I need more cradles (I have more devices than cameras), this is ideal.  Most other systems require that you purchase the base plate and cradle together, so you end up with all these extra base plates.  The base plate cradle combo is $25, and you can purchase the base plate by itself for around $14.

From the P&C site:

This Custom Quick Release Base is designed to work with the Fancier WF717, WF717AH, EL717, and other 717 Video Fluid heads from Weifeng or Fancier. The Quick Release Base is solid metal with one 3/8" threaded access port and two 1/4-20 threaded access ports under the base. There are also (4) 1/4-20 threaded ports on one side of the quick release plate that can be used with accessories when the receiving adapter is not mounted.

This system is also a little more “universal” in that the product is made in China and rebranded for quite a few different companies (Fancierstudio, ePhoto, Cowboy Studio, Photograpy & Cinema, and DMKFoto to name a few).  Thus, it should work with equipment from all these companies.  I think I’m actually going to buy the ePhoto 717AH fluid head ($75 on Amazon) to see if it’s useable. 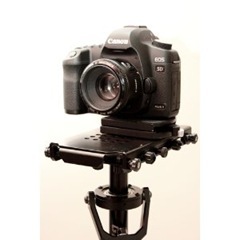 For what it’s worth, Zacuto offers the RC4 (which is evidently a Manfrotto 394).  This baseplate has an incredibly low profile (it’s very thin), though as you can see from the photo, it still elevates a camera considerably. By the look of it (the shape –it’s almost square with one rounded edge), I can’t imagine there’s any chance of this being compatible with anything other than itself.  Still, at only $45, the price is well within the possibility of outfitting your entire system and not breaking the bank (surprising from a brand like Zacutto, who’s prices are pretty much cost-prohibitive in every other category).

A lot of people seem to like the Giottos MH621 Quick Release Adapter with their Gitzo sticks, but it doesn’t seem to be compatible with other brands, so I don’t really have any interest in it (the Giotto plate is 1.8” wide and the Manfrotto plate is 2” wide).

I’ll post more info. and updates as I find them (see link at beginning of this article), but for now, I’m going with the Fancier studio 717 system.  Fingers crossed!

Posted by The Invisible at 9:47 AM

As I understand it from a good deal of digging (though not from actual ownership), the answer is yes.

When the time comes to have a project or "benefactor" fund the equipment list, I would ultimately like to upgrade to the Manfrotto plates and heads.

I guess I will buy the head and hope you are right. Anyway, thanks a lot for this guide!

Correct. The 357 is a great deal longer, but should still fit width-wise (and height, so it slides in). If you get a chance, post back and let us know for sure (so we have the word of someone who's actually done it personally)! I'm fairly confident you'll be fine, but real-world experience is the only "true" test!

Aargh !
Nooo !
There are two widths of manfrotto plate - 52mm and 58mm. Not interchangeable !

But the plate-holder looks the same size - just the moving tab driven by the screw is longer.

When I said
"moving tab driven by the screw is longer"

The 357 has a narrow tab
(Part R357,03)
http://www.manfrottospares.com/index.php?route=product/product&product_id=354

... and, no, i don't think it's easy to convert a tripod-head from one system to the other.

Oh, and fake 577s are available at half-price
http://www.amazon.co.uk/s/ref=nb_sb_noss?url=search-alias%3Delectronics&field-keywords=577+dwcx

Thanks for all the updates, Eric!