All I needed to do was replace the 10 amp fuse in my wife’s car stereo.

For the life of me, I can’t figure out why Volkswagon decided to require four keys to remove the double DIN car stereo (head unit) from the dash.

The keys are “readily” available from eBay, Amazon, Crutchfield, etc. (priced anywhere from $4 to $25), so it’s not like a thief can’t get the tool to steal your radio (though people have reported dealerships not having them), so the ONLY purpose to these keys as far as I can tell is creating a major inconvenience to the person who has purchased their product.  Thanks, VW.

Anyway, rather than purchasing these “keys,” which means buying them online and having to wait for them to arrive (since your dealer may not have them, or better yet, may not want to sell/lend them to you… because they want to charge you $50 to replace a fuse), you can easily make them out of a hanging file folder, as shown in the photo below. 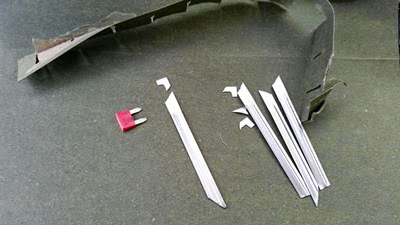 Take the two metal hanging “rods” (they’re flat, so they’re not really rods) out of a hanging file folder.  They are “L” shaped at each end, but before the “L” the metal tapers.  Simply snip off the “L” with a tin snips so you have an angle at the end of the metal piece.  Cut the two metal pieces in half so you have four pointy pieces.  Stick the pieces into the slots on your HU with the pointy part away from the center of the stereo.  You may need to wriggle your “keys” around, but you are just trying to push the metal clip/tab out, as seen in the photo below. 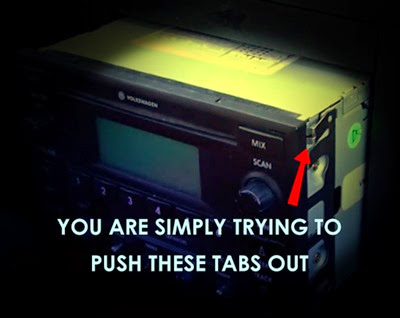 Once you have the keys in and you think the tabs are pushed out, stick your fingers in the tape deck and pull the unit straight out.

If you’re changing the 10 amp mini fuse, it’s located behind the main connector plug.  Lift the “gate” that holds that plug in, pull out the plug, and you’ll see a red mini fuse.

Posted by The Invisible at 7:18 PM

Email ThisBlogThis!Share to TwitterShare to FacebookShare to Pinterest
Labels: automotive, do-it-yourself, how to, VW