My First Couple of Days with the Motorola Z Force Droid

I REALLY wanted to buy a small phone for my next phone, but the Fates conspired against me.  The only option I had was the iPhone SE, and while I LOVE the size and design of the phone (I really love the hard edge and metal buttons and switch), I know I can’t live in an iOS world.  I would go mad.

The only other option on the market is the Sony Z5 compact, which I REALLY wish I could use, but it’s a GSM only phone, and I live in Denver and regularly travel into the mountains, so Verizon (CDMA) is really the only carrier I can use if I expect to have signal when I want it.

Thus, for my next phone I went with one of the LARGEST phones on the market. [frown] 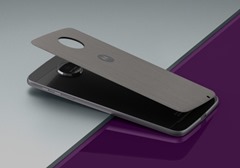 I ended up purchasing the Droid Z Force, mostly because it was $108 (with two year contract and including tax) out the door at Best Buy (and they threw in the JBL speaker mod to boot).  With Verizon, there is a $40 activation fee that appears on your bill when you purchase a new phone… even at the Verizon store!  Evidently the only way to get that fee waived is to purchase and activate online with Verizon, which would have been a lot more expensive (full MSRP and no bonus mods).

Man... when any store tries to convince you that the monthly payment plan is the way to go, CHECK... THEIR... MATH!  Even with the "monthly line discount" they try and bait you with, if you do the monthly payment, you are paying full price for the device over 24 months.  That means you also pay the tax on the MSRP up front!  That alone was going to be $62, then the activation fee, then the full cost of the phone over time (meaning a higher bill every month).  Crazy business.

The Samsung Galaxy S7 was going to be $220 (with 2 year contract) plus activation, so I just went with what was saving me money, not to mention avoiding the awful one-two punch of the way Samsung and Verizon turn a great phone into a piece of crap with their bloatware (and I have been quite pleased with the "clean" environment of the Moto-verse).

As I mentioned, BestBuy was also giving away the JBL speaker mod with the Droid Z Force, and while it's not going to be loud enough for DJ-ing parties and weddings, it's actually a pretty decent little speaker and will be great for working on location and listening to tunes.  It has it's own battery as well, so that's great (I have read that the speaker battery can actually power the phone, so it's like a battery mod as well, but I haven't confirmed that yet –I have confirmed that you can charge the mod through the phone though).

While I definitely hate how big the Droid Z Force is (bigger than my S5 and probably the same size of the Note 5), I have to admit I'm loving the functionality and speed.  The Motorola fingerprint reader is stellar, and I love how you can use it to lock and unlock the phone one handed.  You can also choose to link it to other passwords and apps, which is nice (though I won't be linking it to my banking and purchasing apps).  They warn you that it's not as secure as a pin or pattern, but I assume that's because you can "lift" a print from the reader, so I'm trying to get into the habit of swiping my finger down after it registers, effectively wiping the reader clean of my physical print.

When I powered up the phone to activate it in the store, the battery was at 99%.  We were on our way into the mountains for a wedding, and the device ONLY comes with the turbo charger (no stand-alone USB-C cord to use with a car charger --you have to order that on your own, which is pretty of annoying since you don't have a good way to transfer files to/from a computer until you do that), so I had no way to charge the new phone except for plugging into a wall.  Even with doing all the initial syncing, playing with the phone and figuring out features, downloading all my apps, etc. (all over 3G and 4G/LTE because I had no wifi), the phone was still at 33% the next day's afternoon!  Way more than 24 hours on the factory charge with a substantially higher amount of use is pretty impressive.

Not only that, but I went from 25% to 100% in less than a half hour charge using the included turbo charger.

I have been using Qi wireless charging with my S5, and I actually love it, so I'm pretty disappointed that the Droid Z Force doesn't have wireless charging, especially since pretty much EVERY other "flagship" has it these days.  I guess the turbo charge will have to make up for it.  There is an external battery pack mod that will do wireless charging, but I’m not going to buy an extra mod just for wireless charging.

I do wish the phone was water resistant like my S5 and the S7, and I'm not sure why it isn't.  The Z Force only has three physical buttons, the card slot, and a USB-C port.  It seems like it would have been relatively easy to seal up.  They advertise that it has a water resistant outer covering, but isn’t all plastic and glass water resistant?  I’m not sure what that even means.

The camera is great so far.  There's a "pro" mode that allows me to set ISO (though not aperture and shutter speed), so I'm loving that.  Maybe there's an app that will allow me to access those extra manual features.  Also... the camera is 21MP, so I can actually do some zooming and still have "flagship size" (8-12MP) and quality on the zoomed image.

Hasselblad is coming out with a camera mod for the phone (there was actually a physical spot for it on the Z Force displace at Best Buy, so it must be coming soon).  I'm interested to see what the price will be and how much higher the quality is (it will supposedly do RAW and will have a 10x optical zoom).  It seems weird to have to get a "better" camera mod for a phone that already has a 21MP camera, but we'll see.  Also, I'm not sure what the advantage would be to having a "mod" instead of a stand alone camera that will likely be the same size, but again, I guess I'll see.

I've read that though the screen is "shatterproof," that feature comes at the cost of being pretty scratch prone (the surface layer that keeps it together is soft), so I ordered a couple screen protectors.  I prefer a matte finish on my screen anyway (no glare and a more pleasing tactile feel).

I'm also trying to figure out which case to get.  I can't imagine not using a case on a phone to protect from scratches and dents, but the PITA about the "mods" on these phones is they won't attach if the phone is sporting a case.  Thus, I need to find a case that is easy to take on and off, and that can weather the abuse of constantly taking it on and off, so I'm able to attach mods when I want.  To me, this is the biggest draw back of the phone (other than it’s size).

There is also a "style shell" that is just a faux wood back.  I guess it looks pretty cool, but it really just adds thickness (almost doubles the thickness of the phone), so I'm not sure what the point is, other than looks (which don't matter if you're using a case).  If the "mod" doesn't really offer any protection, it's seems kind of stupid compared to a case that would protect the back, edges, and front (with a raised lip).

Again, I HATE the size of this thing.  It would be awesome if it were the size of my original Droid Incredible. But everything else about the phone seems pretty great so far.  And I really can't get over how much I'm loving the finger print reader to turn the phone on and off "securely."  Not having to enter a pattern all the time is really nice.  It's actually got me locking the phone every time I turn the screen off, vs. setting a longer time out to lock the phone for reasons of convenience (and making the phone less secure).

Posted by The Invisible at 1:10 PM