Man, I gotta say, other than size (which I will bitch about vehemently until they bring phones back down to the size of my original Droid Inc.), I am loving this Droid Z Force. 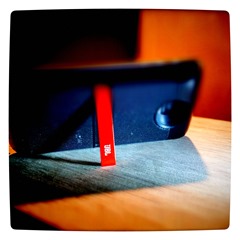 Except for the most extreme high-use periods, I easily get two days on a charge, and when it drops down too low for my liking, it only takes about an hour to get it back to 100%.  The quick charge is amazing, even when using “slower” chargers like my Anker multi-port or my car charger (though these do have higher powered ports than average chargers).

Not only that, but the speaker mod, though a little bulky, contains a huge battery (and the added bonus of actually pretty decent sounding music on the go!).  I often just leave it on the phone, even if I'm not planning on using the speaker.  It still fits in my pocket nearly the same (obviously quite a bit thicker), and it actually makes the phone a little bit easier to hold onto (though it's not great in the car holder –too thick).  The phone with the speaker attached is kind of like carrying around a comfortably-edged (rounded), small Bluetooth speaker... except with the added bonus of a powerful phone/computer/browser/media player attached! And the kickstand on the speaker, which I use more often than I ever thought I would, is just icing.

Not only that, but for around $80 (or $30-40 if you want to brave the eBay gray market) there is a Qi (wireless charging) 2220mAh additional battery mod by Tumi/Incipio (which are now one in the same since Tumi licensed Incipio for a year).  You can go for days without charging!

The Google Pixel seems to be ruling the current mobile roost, but the Droid Z Force is spec'd pretty much the same, and all the apps that will "only" run on the Pixel actually run on the Z Force as well (including all the VR stuff that I have no use for).  And though a lot of people think the Pixel camera is tops, I really think the Droid Z Force phone is great (and, for what’s worth, I make my living taking pictures).

I feel like I bought at the right time.  Any time you purchase a phone and they start the hard push with advertising four months later (like with my GS5), and then the specs are still as good as all the brand new phones coming out (like with my GS5)... I feel satisfied.

All this for a phone I got for absolutely free (w/ two year contract) because at the time everyone was going gaga for the Samsung S7.  Doggonit, I feel like a winner.