That said, I hadn't heard a whole lot of new music since releasing Amplifier. While I was finishing the album, it was all I was listening to, and after it was finished, I returned to a lot of the music I had been missing while completing the album (Wilco, especially Summer Teeth and YHF, U2, Sergio Mendes, Les Baxter, The Police, Arcade Fire, Weezer, Steely Dan, Death Cab, etc...).

I've also gotten a little lazy with playing DJ, so I've been using Pandora a lot. Though in my defense, I did spend quite a bit of time "seeding" the various stations. (click here for my stations)

One of my stations focuses on newer music like Arcade Fire, Hot, Hot Heat, Grand National, Built to Spill, OK Go, etc... From there I was turned on to some new music.

LCD Soundsystem (I know: where the hell have I been, right?). I actually bought the CD (the first one, the self-titled double). I freaking LOVE it. Not to mention, now Daft Punk is also playing at my house again (it's weird how you can forget about bands until you're reminded what you're missing). I was also turned on to Mute Math by Pandora. I had heard people talking, but I thought these guys were gonna be a sort of Interpol-esque bunch of emo-catering math rockers. They are much more mature than I expected. I love these guys too.

Anyway, the reason I started this post was that I came across a couple reviews in the latest Wired and decided I'd check out some super-new music. Both Tapes n' Tapes and M83 got some pretty decent blurbs, so I hopped online to check them out. 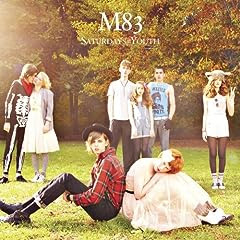 M83 will be releasing Saturdays=Youth on April 14th. They've got "Couleurs" (along with four older tunes) available on their (annoyingly WIDE) MySpace page as a preview. Let's just say, with Wired's 9 out of 10 "dots" and references to Kate Bush and Cocteau Twins, I was expecting a lot more. Perhaps the rest of the album is more awe-inspiring than the single song on the MySpace page.

On to Tapes n' Tapes. On Tuesday, MTVU's Turn It Up! made the new album Walk it Off (April 8 release) available for streaming. I've been listening to the whole album. I think it's just not really my style. There's a lot of elements I like. There's some Modest Mouse and some Built to Spill in there, even some Talking Heads and Led Zepplin influences that I'm really enjoying. I love the bass and drum interaction (definitely check out the final cut, "The Dirty Dirty"). But in the end, it reminds me a lot of the things I really don't like about Interpol (I know that's my second Interpol reference... I can't get them off my mind, I dislike their music so).

So for now, I'm sticking with Mute Math, LCD Soundsystem and Daft Punk, unless you've got something you think I'd like?

I agree about Tapes N' Tapes. It's not bad, but I just can't get into it.

Have you heard MGMT? I kind of dig their stuff (the single, "Time to Pretend" really grabbed me) I've also been listening to tons of Arctic Monkeys, because I love pop-ish punk. Not sure if you would dig them, though?

What about Of Montreal? Have you given them a good listening to? I'd heard bits and pieces, and couldn't really get into them until I heard a rave review of their latest album "Hissing Fauna, Are You the Destroyer?". I know, it sounds pretentious as hell, but it's a total blast. I've gone back a few discs, and I don't like them quite as much (though "The Sunlandic Twins" is also really good) but if you haven't given them a chance, do so. You'll probably wind up liking what you hear.

Haven't heard MGMT; I'll check 'em out. Haven't really been thrilled by anything I've heard by Arctic Monkeys. It's fast and fun, but that phoney-baloney accent just kills me.

I love Of Montreal live. I haven't heard a lot their recorded stuff, but I did check out the link of a thousand live bootlegs you posted a while back. I downloaded every one, and to be honest, there's not a single one that I will ever listen to again... kind of soured me to Of Montreal.

So thanks for that, Troy.

Heh...I'm sometimes amazed that I'm such a fan of your stuff, because otherwise we have almost opposite tastes in music!