Palin: this is what the Republican Party thinks of women?

Screw the glass ceiling, this woman is going to set women's rights back a hundred years. 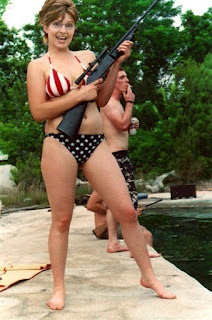 Yes, I know the photo is Photoshopped, but it's funny (and fairly accurate) nonetheless.
Erika is so furious about this lady, she can barely even speak (and that's saying something). The day McCain announced his running mate, was a dark, dark day for women across the globe.

This lady doesn't "believe" in evolution. While even I have been known to question some of the specifics and gaps of the chain, I'm not pushing to replace it with hocus pocus. Evolution is at least science, based on facts and evidence. She wants creationism taught in schools. What year is this?! Yeah, science is probably a foolish thing to be teaching our nation's children. We're plenty ahead of that whole education game anyway.

This is a woman who in May of this year announced she would sue to block Washington from listing polar bears as "threatened" under the Endangered Species Act (NYPost.com). Are you freaking kidding me?! Just so we can ignore the fact that we are screwing the hell out of the flora and fauna on this rock we call home?

Don't even get me started on the whole pregnant daughter and this woman's burning desire to reverse Roe v. Wade. The debate is not about life; the debate is about privilege. The fact of the matter is that privileged white people don't have to worry about Roe v. Wade being over turned because they'll have access to clean and safe procedures whether it's legal or not, because they've got money.

Hilarious that McCain chose Palin to win over Hillary votes. Surely (please, god) Hillary voters can see right through this transparent puppet. Just because she's got boobs and could be VP doesn't mean she's advancing the position of women in the country and the world.

She will, in fact, do the opposite.

And what's up with the Republican party continually touting Palin's ability to kill moose (who in the f*ck cares?! ...other than Bullwinkle fans).

I'll leave you with a list of books Palin wanted banned from the Wasilla city library (the list is from the city board meeting's minutes). Yes, that's a DICTIONARY at the end of the list.

[Sept. 7, 2008] Turns out the list was a fake, but the quote from Mayor John Stein about Palin wanting to ban books from the library is legit; here's the quote:

Stein says that as mayor, Palin continued to inject religious beliefs into her policy at times. "She asked the library how she could go about banning books," he says, because some voters thought they had inappropriate language in them. "The librarian was aghast." That woman, Mary Ellen Baker, couldn't be reached for comment, but news reports from the time show that Palin had threatened to fire Baker for not giving "full support" to the mayor. (Time)

Posted by The Invisible at 5:15 PM