NOTE: While much of this review dwells on the negative, I believe that this item is ABSOLUTELY worth the purchase price, and no budget DSLR filmmaker should worry about getting something “worth the money” ($200) when purchasing this monitor.  Be sure to check the updates at the end of the post for information gained after more time using the monitor.

Here is the link to the actual item I purchased for this review: http://www.amazon.com/gp/product/B005VGVH2S/ 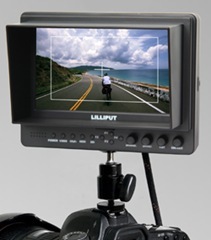 Though it comes with collapsible sunshade/screen protector (not like the one shown in the picture, which is rigid and doesn’t collapse), cable, battery, battery plates (2 different kinds), and charger, be aware that this particular item does NOT have HDMI out (only in).  I looked at no less than 5 similar, almost identical listings on Amazon.  The proliferation of multiple listings with very slight differences makes purchasing the exact monitor you want (the features you need), extremely frustrating.

This could be a GREAT product if the manufacturers and sellers would get their shit together.

First of all, there are like 1,000 different models (OK, actually five or ten… but when you start including similar models of the same brand, it gets up into the twenties) and combinations of features for these monitors on Amazon, so be sure to READ THE DESCRIPTION for the particular model you are buying VERY CAREFULLY (so you can argue with confidence when you need to return the item you received because it's not what you thought you were getting).  They are ALL called Lilliput 665gl-70np, but they don't all have the same features (not just accessories, but actual hard-wired, on board, hardware features)!  I can't state any clearer: even if you read carefully, you may not receive what you think you should be getting (read on).  Not only that, but even though the item TITLE states 665gl-70np, the small print (a cluttered box of text all run together in the description field) states “includes 665gl-50np.”  But in my case, it DIDN’T include the 50np, and I received the 70np.

To make matters worse, there were other models (like the 668) that are “sort of” billed as the same monitor, so you really, REALLY have to be careful what you’re buying.  The biggest (or perhaps most significant) difference between older and newer models is that the older models have an INTERNAL and PROPRIETARY (not third party) battery.  You can buy an extra battery and external charger, but putting it in the monitor requires taking the back of the monitor apart, not just simply slipping the battery on and off like with the new models.

One of the biggest differences even in the monitors with the same name is that some models have NO HDMI OUT.  I believe this is the difference between “ho/y” and “h/y” but I wouldn’t count on it (at the very least I wouldn’t count on receiving what you think you’re getting).  I went back and carefully read the block of text on the page from which I purchased my Lilliput 665-70np (or is it a 50np?), and now see that although it looks exactly like the block of description text on all the other models, "HDMI out" is absent.  I thought I was paying very close attention to all the small print, but here I am two days before a shoot with a monitor that doesn't have all the features I need (what I thought I was buying).

The thing I'm most aggravated by is the difference between 50np and 70np, and the fact that most of these offerings on Amazon are listed as BOTH models (again, 70np in item title, 50np as what’s included)!  First of all, there is a question concerning the brightness.  Is my screen as bright as what I thought I was purchasing (450cd/m2) or is it only half that?  The 70np is NOT 450cd/m2 as advertised.  Only the 50np is that bright.  You can only find this out once you receive the item and read the manual, but the 70np model is NOT 450cd/m2 as advertised.  It is only 250cd/m2.  Evidently only the model 50np is brighter, and it still DOES NOT achieve 450cd/m2 (it's only 400).

I should point out again, some of the Amazon listing pages state "70np" in the bold item title, while the description states that you will receive the "50np."  But here's the kicker: you have NO WAY TO KNOW which item you received, because the model number is written NOWHERE on the unit.  The serial number alludes to 665 and also 70, but it doesn't tell you if you have the 50np or the 70np (I assume the 70 means I received the 70np).  So, on THIS PAGE, the item clearly states it's a 70np, but in the item description is states under INCLUDED: "Product 1× 665GL-50NP/H/Y."  So which is it?!  My serial number starts 665A70... thus I assume it's a 70np (not the 50np I paid for).

Unfortunately I HAVE to have this for several shoots this weekend, so even though it doesn't have all the features I want (and ordered), I have to keep it.  Luckily, it's relatively cheap, but if I'm spending over $200 I'd really like to know that I'll be receiving what I ordered (and spent a week researching).

I would likely give this item four stars if it had HDMI out and was 450cd/m2, however, I'm not sure how I can purchase the monitor I want and be sure that I will receive the correct item (all the listings on Amazon are a mishmash of information).

So be aware: It's a great price for a field monitor, but as you can imagine, it's a crap shoot as to what you'll be receiving.

I have seen a few reviewers claim that the picture doesn't fill the screen.  Solution: you have to disable all the "extras" on your camera LCD by pressing the "info" button.  Only when there are no extras showing (exposure, etc.) will the image fill the screen top to bottom on your monitor.  It still won't fill the width, because your camera's LCD (what the monitor is reading from) isn't 16x9.

Also, the 668 had an issue with 3 seconds of blue screen or black-out when switching from live mode to record (because Canon’s switch from HD out to SD out when entering recording).  There is a way to override that with the 668, but the issue seems to have been eliminated altogether with the 665 (I haven’t run into the issue).

UPDATE: Upon further review of the "manual," there are photos of two models shown ("1" and "2") 1 is supposedly the 50np and 2 is the 70np.  The photo of the 50np shows that it only has two knobs on the front as well as a 1/8" headphone jack.  "Ah, I must have the 70np," I deduced.  However, the 70np clearly shows 8 capped video connectors on the back of the unit, with only 6 on the 50np.  However, while my unit has NO headphone jack and FOUR knobs on the face, there are only six capped connectors on the back.  Thus, I still have NO IDEA which unit I received.  This is also further confirmation that there are many, many configurations of these units, and it's anyone's guess as to which models feature what hardware, connections, controls, dimensions, panels, brightness, etc., etc.

NOTE: Some of the review above is taken from my initial Amazon review.  The seller actually contacted me and asked me to change my review of the item, and additionally the review I left for the seller.  I let them know I would be happy to oblige once they had updated their listing with correct and truthful (not misleading) information laid out in a way that was easy to read and understand.  I also let them know that the burden of returning the item (and all that that entails: postage, repackaging, going to the shipper, shipping, time without the item, etc.) should be on them, not on me.  I shouldn’t be the one who has to suffer for their misleading and “not exactly true” item description.

UPDATE (4/7/12): I’ve been using this monitor in the field for a bit now, and while I’m still very disappointed in how the item is listed on Amazon (extremely confusing and misleading), there is no question that this monitor is ABSOLUTELY worth the purchase price of $200.  In fact, I’ll likely buy a second one, though I’ll be sure that the second has HDMI out so I can daisy chain them (one for the camera operator, one for the director in video village).

One thing that is important to note, and I assume that this is the case with any field monitor of this size, if you are shooting outdoors, the monitor acts as a wind sail and will cause a LOT of camera motion unless you have an incredibly stable monitor and head (even then, I have doubts about being able to eliminate camera shake when mounted to the camera flash shoe).  I used a pretty heavy duty tripod and head for a recent outdoor shoot (Bogen 3046 with a 3047 head), and no amount of tightening would prevent camera shake when shooting outside, even in just a slight breeze. From now on, I will be using a second tripod to mount the monitor when shooting outside (this is of course less of an issue when shooting hand-held).

Also, some reviewers have been confused by the “power” button on the face and the on/off switch on the back.  The power button on the face is more like a standby, and just turns off the screen.  The switch on the back controls power for the whole unit.  The way the buttons light up when unplugging and plugging cables, turning the camera on and off, etc., is pretty intuitive, and you get the hang of it after using the monitor for a bit.  I’m not sure that using the “standby” power button is worthwhile, as it takes about the same amount of time for the monitor to “come alive” and communicate with the camera regardless of whether you use the button on the front or the switch on the back.

Thanks for your review of the pros and cons of this monitor.

I believe that your problems in selection of the 'incorrect' monitor are 100% your own fault and in the spirit of fairness should play such a dominent and repetitive part of your review.

Well... I believe that you didn't really read the review very carefully, because I say that I ABSOLUTELY recommend this monitor. The main mention I make of anything "incorrect" is in the incorrect text on the Amazon listing, so I'm not sure how that's my fault. I didn't select the wrong monitor (it's the monitor I wanted but for the fact that there's no HDMI out); it's just that there was a lot of incorrect information in the listing. Thanks anyway.

Thank you very much for this informative review (am looking at buying a Lilliput product). I also just looked at the trailer for your film and the dance scenes look gorgeous.

Thanks so much for checking out the trailer, Pinkhamster!

Though it comes with collapsible sunshade/screen protector (not like the ... monitorshdmi.blogspot.com