Cutting the Cable: One Year Later (a real world experience)

It’s been nearly a year since I cut the cable, so I thought I’d provide some thoughts on my experience, what has worked, what hasn’t, what I actively use.

For some time, the center of “cutting the cable” was a good HTPC (home theater computer).  This was where the physical media was streamed from, and also the access point for the television to actually show programs/media from the internet.  While a home theater PC is still a great tool, it’s getting easier and easier to get by without one.

I am set up with a NAS (network attached storage -in my case a Thecus N5550 with 5x 3TB RED WD drives for a total of around 11TB of media storage), and a Roku stick on each of our TV’s (one in the bedroom, one in the living room, one in the kitchen).  We also have the original television antenna that was installed on our roof around 1963, and it does a fantastic job of pulling in nearly 30 HD broadcast channels (for free). The broadcast television signal is processed through an older TV Tuner Card (Hauppauge 1196 WinTV-HVR-1250) that I purchased in 2010 and have installed in an older computer (from 2007) that we use as an HTPC (home theater computer).

Plex has become a major part of our media set up.  It’s a program that will push content to Roku from your NAS (and various other places, but I’m mostly concerned with getting my media from my NAS to my television, and that happens via Plex and Roku).  Plex has a subscription based online experience with various channels and content, but the actual channel/app for your Roku is offered for a one time purchase of only $5, and it is WELL worth it (you can try it first for 30 days free).  You also need to have a server running the Plex Media Server (I installed a free Plex Media server module on my Thecus NAS so all the media is streamed using the Plex Server from the NAS –but you could just as easily stream content from a PC).

Plex is able to convert media on the fly, so anything you throw at it is converted to h.264 and fed to your Roku over wifi.  I was allowing Plex to convert VOB’s from my ripped DVD collection (all ripped from DVD’s I own, for those keeping tabs), but I have recently begun converting a lot of my movies and ALL of the TV shows on the server to h264 using HandBrake and/or MakeMKV.  Plex does an “ok” job of converting on the fly, but if the files already exist as h264, you get a MUCH MORE streamlined media streaming experience (read: no delays or hiccups when watching).  The h264 files at the same native resolution also take up a LOT less space than VOB files (which are MPEG-2).

I am still using the HTPC (an actual computer), but funny enough, we use it mostly just to watch Hulu (you can’t get Hulu on your Roku unless you pay for HuluPlus, and I’m not interested in paying $10/month for a service that DOESN’T eliminate the commercials (what the hell?!)).  Also, from what I understand reading other people’s complaints about HuluPlus, it doesn’t even offer all of the content on Hulu free (again, what the hell?!).

I am close to finalizing our over-the-air recording set up (broadcast TV recorder) that will allow me to stop using Hulu altogether.  We pretty much only use Hulu to catch up on Network TV that we’ve missed throughout the week, so once I am recording all those shows with a PC/TV tuner and the broadcast signal from the aerial antenna, we’ll be able to stream the recorded programs from the NAS via Plex/Roku and will no longer need Hulu –or an internet connection, for that matter.

We’re actually already set up to record broadcast TV (just Windows Media Center on the bedroom HTPC), but it’s a part of an HTPC that has to be physically hooked up to the TV, and I’m working on getting it moved elsewhere, and then automating the record/convert-to-h264 for Roku streaming process and we won’t need an attached HTPC cluttering up the bedroom or making noise where we’re trying to watch/sleep.

Recorded TV: you can set up XBMC (free media software) with a third-party recorder like NextPVR to record TV from signal using a tuner card in your PC, but I prefer to just use Windows Media Center, since it comes with Windows and doesn’t require any additional work (Windows 7/8 come with television recording ready to go –you just have to buy a TV Tuner Card).  There are also other software programs you can use to record live television with a PC Television Tuner Card (often they come free with the TV Tuner Card).

If you’d rather go the XBMC route, here’s a post on Lifehacker showing how to set up the software (again, it’s a bit more complex than just using WMC).

The only problem I have with WMC (Windows Media Center) is that it records to a proprietary format (.wtv) that’s really just a container file for video encoded using the MPEG-2 and MPEG-4 standard and audio using MPEG-1 Layer II or Dolby Digital AC-3.  Some people have had trouble converting the .wtv format to h264 with Handbrake, but to date (knock on wood) I haven’t had any issues; it’s been working great for me.  I just use Handbrake to convert the files recorded by WMC directly to h264 for streaming.  If it doesn’t work for you, you can try right-clicking the WMC file (the .wtv file) and converting it to the older Windows Media Player format (.DVR-MS), then converting that file to h264 with MakeMKV and/or Handbrake.

So outside of the stuff we stream from the NAS (ripped movies and television shows from recorded over-the-air and ripped DVD’s), we use Roku to stream from Amazon Prime, HBO, and some PBS (and will likely start streaming Netflix again in the near future).  I’ve tried using Roku channels like the History Channel, but the content is limited to a couple of episodes of each show so once you’ve watched the channel, it’s basically “used up” until they refresh the content in a week or a month).

A lot of the “cable channels” on Roku are set up this way.  You can watch one or two episodes of each show, but that’s it.  Some of the channels will allow you to subscribe to see all their content, but I’m not willing to pay $30 to watch a season of a single channel when sources like Amazon Prime have tons of content (thousands of shows and movies) for one, much lower, subscription price.

So, to recap, I rip DVD’s to h264 and put them on a NAS (network attached storage, 11TB of media that is always on and available).  I also record Network TV from an old fashioned television antenna that receives almost 30 broadcast channels (in HD resolution) over the air.  The ripped DVD’s and recorded television are converted to h264 (.mp4 or .m4v) for streaming from the NAS via Plex on the Roku hooked up to each television.

We also watch movies and television from Amazon Prime (paid subscription), HBO  (Comcast has added streaming HBO to a couple of their ISP packages, including Internet Plus and Blast Plus, see image below), and soon Netflix again (we dropped it for a while, but are going to sign up again). 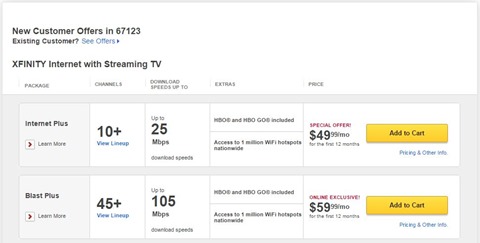 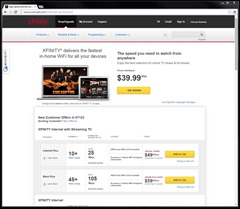 We have almost cut out the HTPC (the home theater computer), and the only thing that might be missed will be direct access to the internet (but almost all content accessed directly from the internet can be found through other plug-ins/apps/channels/routes).

We are doing quite well without paying for cable.  I think some people would miss the “ease” of channel surfing, but I actually like the control of a more specific and intentional media watching experience.

There are also TONS of options for streaming to your tv from your phone or tablet (things like Twonky, Roku Screen Mirroring, various content provider apps, etc.) as well as Boxee, Apple TV, Xbox, Chrome Cast, Amazon Media Fire, etc., but for us, an antenna with a PC tuner card, NAS, Plex, and Roku are what we find serve us best (and for so much less cash than a cable subscription!).